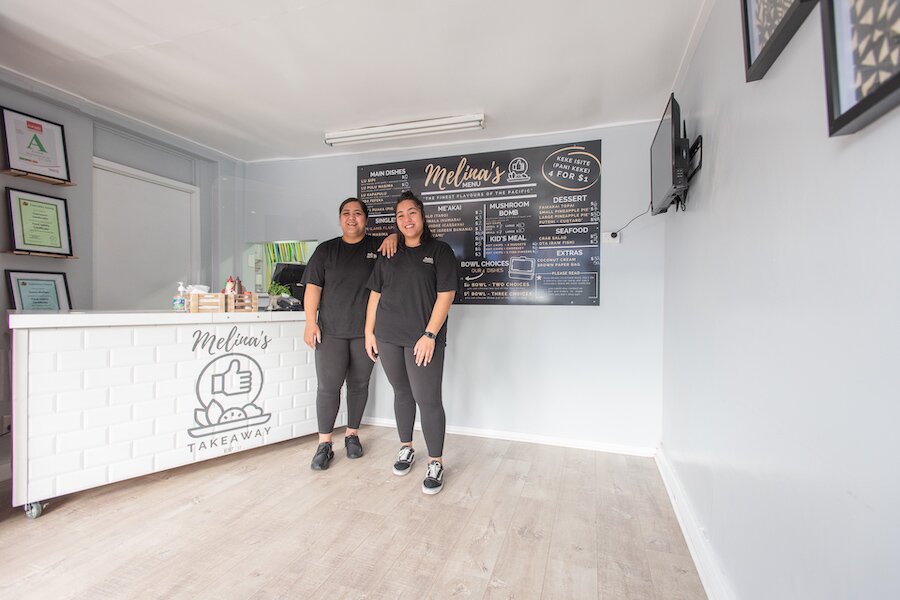 It was our Mum’s idea to start this business. She always thought of starting a takeaway for Pacific Island food as there really aren’t that many outside South Auckland. She was chatting to the guy who used to have this place and he said it would be available soon so she decided the time was right to make it happen. The name comes from both of us sisters - Melema'u and Tina combined makes Melina’s. Mum cooks all day, with our help and we run everything else. It’s busy for sure but people seem to like what we do, and keep coming back for more.

It’s complicated cooking our traditional food in a takeaway situation. It’s not the kind of food you can just whip up in five minutes. Our most popular dishes like Lu Sipi and Lu Pulumasima take at least two hours to cook in the taro leaves. Initially that made it really hard to know how much to cook - we didn’t want to have too little but we didn't want loads left over either. The first week was crazy – we realised we knew how to cook food but had no idea how to run a food business – we learned a lot of lessons in that time and sold out every day. With a bit of trial and error we eventually got the balance right and now it’s much easier.

We opened in early 2017 and at first it was a bit intimidating cooking for other pacific people in this community. We grew up in Panmure and there was always that fear of cooking something that other people know how to cook at home - and whether the Aunties would think they could do better! But after a while we realised people like our way of cooking and were so pleased to be able to get traditional island food when they didn’t have time to find ingredients like taro leaves or to cook things for long periods of time after a long day at work. We have a lot of regulars who live around here and are starting to get more pakeha customers too, which is so cool.

We’ve had so much support from the community. Lots of people from local businesses come in for lunch and our loyal customers all share our stuff on social media. It’s great. And Tina’s really got into the business side of what we do and is now studying business administration, which is something she never thought she’d do. This wasn’t part of our original life plan but it’s been great to be able to start a business in an area we know and love so well, and bring a bit of the islands to people living far from home.

There are around 900 businesses in Tāmaki (Glen Innes, Pt England and Panmure). Together they create community, character and local jobs. Whenever you can, shop where it makes the most difference.